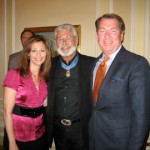 Today I had the privilege of meeting an American Hero. I attended a special breakfast at The Union League of Chicago in partnership with the Pritzker Military Library as they welcomed Congressional Medal of Honor Recipient Sergeant Major Jon R. Cavaiani. I was the guest of BPI Managing Director Mike Buckman.
Sgt. Cavaiani served in Vietnam. He was part of Special Forces and survived the most treacherous conditions as he fought for his country and saved countless lives. I listened to him talk about playing dead among the enemy while he suffered major burns on his body and a gunshot wound in the back. His time spent as a prisoner of war and left in solitary confinement. Even after spending two years there, and dropping from 198 pounds to 92, once free he returned to special forces to serve. In 1974 Sgt. Cavaiani received the Medal of Honor from President Ford It’s amazing he’s alive today and can stand in front of a room filled with people and still show such bravery and passion for life. He deserves our deepest gratitude as do all the men and women who serve their country.

2 Replies to “Medal of Honor”