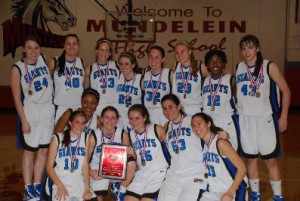 Tonight the Highland Park High School Board has its regular meeting.

I’ll be there for WLSAM890 to see what’s said. The big topic on everyone’s mind is the School Districts recent decision not to send the Girls Varsity Basketball Team to Arizona for a tournament. The decision was made according to School officials citing safety concerns stemming from Arizona’s crackdown on Illegal Immigrants. Now the team is planning a tournament in Florida instead. Superintendent George Fornero and Assistant Superintendent Sue Hebson have come under serious criticism for their decision accused of having their own political agenda in protest of Arizona’s new laws. They have said it’s not a political decision , but one of safety concerns. They have even said the team for 2010 hasn’t been selected and they can’t guarantee everyone on the team will be a legal citizen. Students and parents have said they don’t want to be pawns for anyones political agenda and are trying to stay away from the controversy. I suspect many are asking the same question I have…When should educators be allowed to impose their beliefs or values on students.? The school has certainly endorsed trips to foreign countries, why not Arizona? And isn’t this really a decision for students and their parents .The tournament isn’t required, it’s voluntary. Many unanswered questions, and certainly this story has created public outrage, among many including politicians who are weighing in and of course it’s all the buzz on facebook.