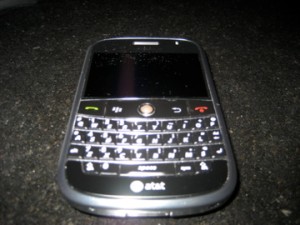 I used to be a huge blackberry fan. Love the keyboard, the screen, how easy it is to use but in the past few years the blackberry has become a huge disappointment. I received my first one at NBC10 in 2004. It was great, the battery ran for days, it never dropped out, the signal with AT&T worked fine. My international blackberry that I took to the 2004 Oympics in Athens never failed me. But fast forward to my return to Chicago in 2007, when I had to give my old blackberry back to NBC and purchase a new one and that’s when it all began to go downhill. The 8800 lasted less than two years. The battery never lasted more than a day. The signal was often weak, and finally the charger point broke and left with me with no choice but to buy another one. So I bought the Bold. Three months later, my bold went bust. It kept shutting itself off, the battery lasted half a day, the signal was lousy. Of course being a longtime customer of AT&T I expected to get a new one. Well to my suprise I could trade it in and get what they call a refurbished one. Basically a used model recycled. No suprise again that 7 months later the second Bold is breaking down. Plus AT&T’s 3G signal is terrible. Yes I can go trade it in for yet another Bold. Plenty of people have stood in line at the loop store and some are on their 6th Bold in a year. But what’s the point?

Plus the service people don’t seem to care that you’ve shelled out hundreds of dollars each time you buy one of these toys .

So I have been weighing the I-phone option which so many rave about except for it’s battery life.

But it certainly doesn’t have the blackberry feel, that easy to use keyboard and screen. I think they make these gadgets today to die in less than two years so we keep spending our hard earned money. Makes you wonder what we ever did before them.