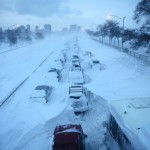 It was fierce and fast and struck one third of the country. The storm crushed cities hitting 100 million people in it’s path. Snow, Sleet, Rain, Ice -became deadly combinations . The area hit hardest, Chicago with more than 20 inches of snow. The Windy City’s third largest snowfall amount on record. It shut down iconic Lakeshore Drive leaving 1500 cars trapped in snow with 70 mph winds and 25 foot waves off Lake Michigan. For a city used to snow, this storm paralyzing–forcing people to stay home. Chicago public schools closed for the first time in 12 years. The city estimates it will cost 15 million dollars. Other parts of the country got socked hard too, icy conditions made travel impossible, 13-thousand flights across the nation were cancelled. This one billed as the worst storm to hit parts of the country in decades. But it did not stop the Superbowl teams from arriving in Texas, they went the day before the storm and Punxsutawney Phil–that little Groundhog didn’t see his shadow so we have six more weeks of winter. Let’s hope he’s right. Stay safe and warm.