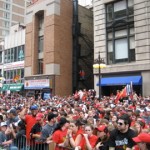 “It’s too Hot Baby.” One of the many theme songs blaring today at the Blackhawks Rally at Michigan and Wacker. Fitting for today’s scorching temperatures which didn’t stop hundreds of thousands of fans from filling the streets just to catch a glimpse of their beloved team parade down Washington Street in a double decker bus. It was a spectacular celebration for Chicago as the team hasn’t won the National Championship since 1961. I talked with many enthusiastic fans along the route as I set out at 9am to capture the intense build up to the festivities. People traveled from other cities just to take part. 200,000 pounds of red recyclable paper confetti dropped from the sky as it all wrapped up with rowdy speeches and before the rain came pouring down just after 1pm. Many fans had poured into the streets from the bars the night before and I witnessed several arrests for disorderly conduct. Chicago Fire officials told me about 60 people suffered from heat exhaustion, 25 transported to area hospitals. My guess is those figures may be higher when the city releases them later today. The mayor says taxpayers won’t have to pick up the clean-up tab, private funding is there. In all a fantastic way to honor the team, so deserving, and a positive sign for our great city..Go Hawks.

One Reply to “Hawks Victory Parade”