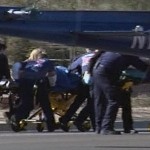 The shooting in Tucson has turned into a circus of pointing fingers.
We desperately try and make sense of a senseless crime committed by a deranged individual because we have this need to comprehend how and why anyone could do something so horrible. Instead of focusing on Jared Loughner, it’s turned into Rhetoric. Tea party activists blaming liberals, liberals blaming Sarah Palin, An Arizona Sheriff calling out the media for inciting anger and hatred, and the current state of the economy and political climate in the U-S as a reason for a new breed of home grown terrorists. We discussed this tonight on Fox29 news at 10pm. Author Buzz Bissinger weighed in calling the blame game insanity and this was the lone act of a disturbed man. We should be focusing on the mental health issue in this country, said Buzz. From all accounts so far Jared Loughner had a troubled past, filled with anger and anti-government sentiment and he targeted Rep. Gabrielle Giffords. Many commented on my facebook page agreeing with Buzz but others saying the politicians and media feed weak minds. Thanks for sharing your thoughts. My prayers tonight to all the victims and their families.