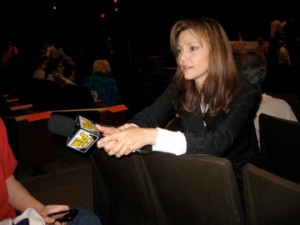 The Highland Park High School Board meeting turned out to be more subdued than predicted. Despite all the controversy surrounding the decision not to send the girls varsity basketball team to Arizona, less than a dozen people, adults and students expressed their concerns to the board. About half the Deerfield Campus auditorium was filled. I counted about 200 people of which a third were there for a student award ceremony. When it finally became time for comments pertaining to the trip, a board member read a statement supporting the administrations decision .

“We are proud of the diversity among our students where more than 15 percent are Hispanic. The safeguarding of equal rights for all of our students has long been a core value of our District. It is too early to tell whether the law recently instituted by Arizona will result in racial profiling. Certainly, there are may different views of the likely impact of the legislation on law enforcement practices. This decision in no way represents a political position- rather, a decision based solely on the concern that a new state law in Arizona, yet untested, may have the effect of subjecting some of our students to unwarranted scrutiny.”

That same statement also included the board’s plan for the future.

“Going forward, we are committed to regularly reviewing and communicating our internal curricular and extra curricular approval process…this will include involving students, coaches and parents…”

Those who did address the board were split. Nearly a dozen adults and students voiced their opinions. Half supported the administration touting the safety of students should be a priority while the other half accused Superintendent George Fornero and Assistant Superintendent Sue Hebson of injecting their own political beliefs. Both Fornero and Hebson had nothing to add when I questioned them, standing behind their decision.

However, those on both sides seemed to agree that the administration made a mistake by not allowing the parents and team members to take part in the decision making process. If they had perhaps this would not have received national attention . The bigger issue -Do educators have the right to impose their beliefs and values into the system and on young minds. One team member did attend and expressed deep concern over how the issue has created a negative image for Highland Park High School. She said she and the team just want to move forward and can’t wait until the December tournament now to be held in Florida.

One Reply to “School Board Backs Decision”